Some Freedom for Lupita

Whether Lupita Nyong’o has permanently, or like past cultural phenomena, merely briefly, expanded conceptions of beauty is still to be played out.  But her arrangement with Lancôme means that she will never have to accept Hollywood drivel as her next project, should that notorious industry do, again, what it has done in the past, with such outside the box wonders.

It goes without saying that when you’re handed the part of a lifetime, you play it to the hilt. In the case of Lupita Nyong’o, the 31-year old Oscar winner — born in Mexico, raised in Kenya, educated at Yale and vaulted to what seemed like overnight fame — the part of the slave Patsey in “12 Years a Slave” was just a preamble for a far larger role.

Unlike many ingénues struck by show business lightning, this one came prepared to turn her allotted 15 minutes into a more durable and moneymaking run. Rather than looking upon the grueling award-show season as a never-ending slog — a “Groundhog Day” loop of dinners and speeches and red carpet treks — Ms. Nyong’o and her management approached the five-month span between the film’s debut at the Telluride Film Festival (and gala premiere a week later at the Toronto Film Festival) and the Academy Awards with what, in retrospect, looks like military precision. 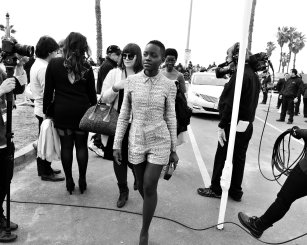 The actress Lupita Nyong’o at the 2014 Film Independent Spirit Awards in Santa Monica, Calif., in March. An Oscar winner, she has capitalized on her fame and gained financial power and cachet. George Pimentel/WireImage

Few of life’s attainments are as good as an Oscar. But in an age of hyper-media, the ultimate prize may not be a gilded statuette for a single film performance but the career leverage, financial power and cachet to be gained from becoming an individual brand. Not long into the awards-season process, Ms. Nyong’o was snapped up by Miuccia Prada, a canny judge of popular culture and its metrics, and signed to be the face of Miu Miu. It was certainly a plum, and yet fashion ad campaigns are ephemeral, few celebrities lasting more than a season or so.

The big prize for a rising star is not a fashion-house deal, but a beauty contract. And last week Lancôme Paris, the luxury cosmetics goliath, announced that it had signed Ms. Nyong’o as its newest celebrity face, adding her to a list of highly paid A-list alumna that have included Kate Winslet, Penélope Cruz and Julia Roberts.

“I’ve always said having this contract is winning the lottery,” said Isabella Rossellini, whose 14-year run with Lancôme allowed the actress, a single mother, to educate her two children and, she said, gave her “the freedom to make only the films that I liked and not the films I didn’t.”

By becoming a brand “ambassadress” for Lancôme, Ms. Nyong’o’s career has “totally changed,” according to Ivan Bart, the head of IMG Models. As the man who took a bosomy teenager with little more than a viral video to her credit and turned her into the branding phenomenon known as Kate Upton, Mr. Bart has a particularly shrewd perspective on the proper deployment of fame.

Seen from afar, the journey of Ms. Nyong’o from unknown to fashion darling looked uncommonly organic and easeful. And without question, say those who have worked with the actress, her intelligence and composure, like her luminous beauty, are true and innate. Yet it takes more than talent and well-distributed pixie dust to seduce the public into viewing a woman who, by her own account, grew up insecure about her African cast of features and dark complexion — prey to the “seductions of inadequacy” — as the cynosure of all eyes.

“Lupita’s stylist and her team should be given a round of applause,” said Bethann Hardison, the modeling agent, fashion industry gadfly and a recently named recipient of the Council of Fashion Designers of America’s Founder’s Award, to be presented in June. “They put her right in your face and you couldn’t deny anything she did. That was genius.”

It was, in a way. No other actress within recent memory has commanded the red carpet as confidently as Ms. Nyong’o did during awards season, when usually performers enduring seemingly unending rounds of photo opportunities must consider themselves lucky to escape citizens’ arrest by the fashion police.

From Sept. 5, 2013, when the Toronto Film Festival opened, to the Academy Awards in early March, Ms. Nyong’o appeared at 66 separate events, which in terms of costume challenges is roughly the equivalent of being crowned prom queen three times a week for almost half a year.

“A lot of people think you just waltz onto the red carpet looking fresh-faced and fabulous,” said Micaela Erlanger, Ms. Nyong’o’s fashion stylist and a woman the Hollywood Reporter recently placed near the top of a list of the 25 most powerful in Hollywood. “But there’s a campaign behind it, a business behind it, and you’re focusing throughout on your message.”

No matter how gifted the raw material, Ms. Erlanger added, creating a coherent narrative for a budding star whose every appearance is another opportunity for brand building requires strategy. The challenge was heightened by the reality that filmgoers knew Ms. Nyong’o chiefly for her portrayal of a wretched character defined by slavery and dressed in rags.

“I was working with this brand-new actress who is beyond talented and who was being introduced to the world through this film,” Ms. Erlanger said. “She is multidimensional and has a lot to show.”

In the bigger picture as it evolved over months of microscopic scrutiny and blinding strobe lights, Ms. Nyong’o would be dressed and coifed and made up by a team that also included her hairdresser, Larry Sims, and her makeup artist Nick Barose in ways designed to convey “her sense of whimsy, her sense of glamour, a sense of the different characters she could play,” Ms. Erlanger said.

Although buzz about Ms. Nyong’o’s performance in the director Steve McQueen’s film reached Lancôme’s executives early, it was only after she became a consistent showstopper — now wearing burnt orange by Givenchy for the N.A.A.C.P. awards; now dressed in emerald Dior for the Bafta awards; now clad in cobalt blue Roland Mouret at the New York Film Festival; now captivating in a red capelet gown from Ralph Lauren at the Golden Globes — that they truly sat up and took note.

“I started checking online and YouTube,” Silvia Galfo, senior vice president for marketing at Lancôme, said by telephone from Paris.

“What was interesting was the build, was what whoever worked with her did, positioning her as a style icon,” Ms. Galfo added. “She came out of nowhere and suddenly you see her being the most coveted ‘It’ girl.”

It was as if, truly suddenly, the mysterious arbiters Ms. Nyong’o referred to in a moving speech written for the Essence Black Beauty Awards as “the faraway gatekeepers of beauty,” had become aware and realized what Lancôme executives also did when they signed Ms. Nyong’o to a contract likely to be worth millions (Lancôme declined to disclose precise terms). They awoke to “the deeper business of being beautiful inside,” as the actress put it in her Essence remarks, and the obvious truth that beauty has no single shade of skin color.

“It’s difficult to say what exactly we look for, though it’s not necessarily perfect beauty,” Ms. Galfo said. “We want women who have their own authenticity, and with Lupita, it was obvious from the first that she was not fake, that she was not someone hiding behind a great dress and great makeup.”

To the credit, in other words, of the people who spent five months putting the actress in that makeup and those dresses, their work remained largely invisible to Ms. Galfo and others. They stayed on the sidelines, allowing, as Ms. Hardison said, “Lupita’s little star to glimmer and shine.”